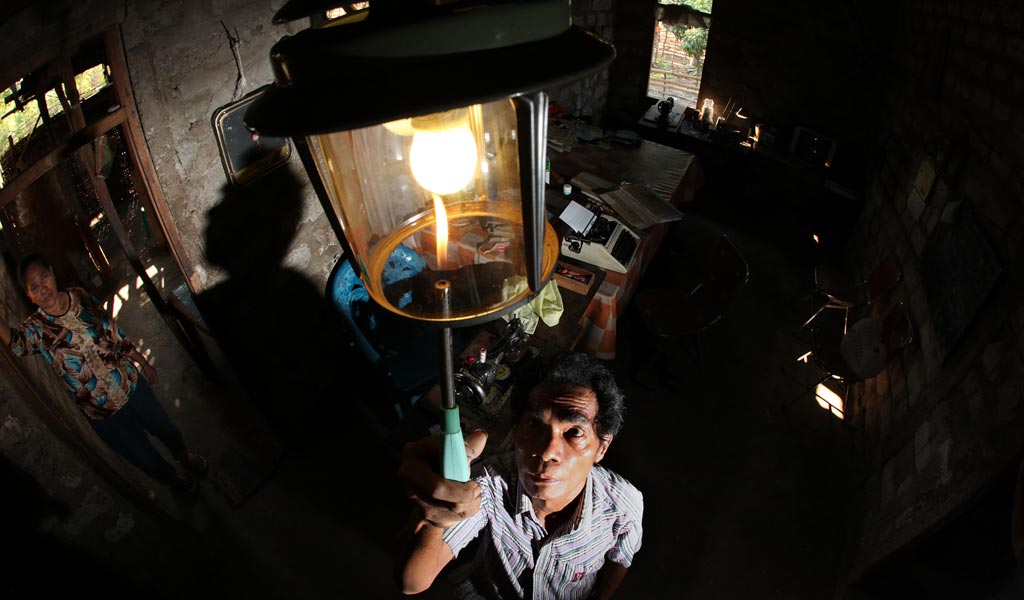 Indonesia uses biogas mostly for the cooking stove or to bring light in the buildings with a gas lamp. That is the most direct and simple way to use biogas for households. This kind of energy ingredient a lot of entropy. That means that the quality of the energy is low. With increasing entropy the energy quality decrease. So low-quality heat cannot be transferred completely into useful work. If you want to produce high-quality energy with less entropy than is a transformation to high-quality electricity the best way. Also, electricity is easier and more efficient to transport for long distances. Because you put the power in the Indonesia power grid system and distribute the electricity all over the country.

The “Renewable Global Status Report” in 2011 found that in Indonesia only 50% of households had an electricity connection.[1]  However, the demand for power would be growing in the future.

2. Use electricity in rural areas

For households, it is also possible to use the stove, lamp, refrigerator etc. with electricity. An estimated 63 million people did not have direct access to electricity due to the high distribution cost. It is easier for households in the way of self-sufficient. That means the households did not need a connection to the electric grid system. Because with the transformation from biogas into electric power the people are able to produce their own electricity. The people go around the loss of power grid. Electricity production and utilization are at the same place. One advantage is the independence from the public power grid.

The power outage is not rare in Indonesia, especially on the islands. However, everyone who has a biodigester to produce biogas are able to self-sufficient with a transformation into electricity.

It is also easier to produce power from another place. Should in this area no power grid exist then it is possible to fill up a mobile storage like a battery where you have too much energy. Now you can move this storage to areas without electricity.

There is an area contains a farmer with small biodigester then he has the opportunity to collect the biogas from several households in one place. Connect the biogas pipes with a generator who produce electricity. So with a more amount of gas it become more effective and they can share their own electricity.

That means that households are able to produce electricity at the end of the supply chain.

The biogas contains chemical energy in the form of methane (CH4). This gas is the main part of biogas and is combustible. Methane consists of a very big amount of carbon and hydrogen atoms. The energy is stored in these atoms and becomes free if the gas is burned. So now after burning, you have really hot air. Thus you have different opportunities what you want to do with this hot air:

After burning the gas it is used the heat for steaming water. Thus you have high-temperature steam flow. This flow is now also high pressured and turns a turbine into a rotation movement. The steam crosses to the turbine and transfers the energy from flowing into rotation movement. Now you have a really fast rotation up to 1800-3600[2] rpm in the turbine. With the help of the induction, you can produce electricity with turning magnets.

The main part of this engine is the piston. Its the same construction as the pistons in cars or motorcycles. The movement after a small spark and following burning in the combustion chamber. With the right air to biogas ratio in the inlet, you have a flammable gas. After the process is over there are carbon dioxide, water and particles in the output. The movement of the piston turns a crankshaft into a turning movement. These mechanical energies are converted to electricity with a generator.[3]

Robert Stirling invented these engines 1816 and is used nowadays from the US Marines.

You need two separated and insulated reservoirs with different temperature levels. Each reservoir has its own piston. One piston is called “power piston”, he returns the energy from the up and down movement into a rotation movement. The second piston is the “displacer”, he only transports the warm and cold air from one to another side. The constantly produced heat from burning biogas leads to expand air in the chamber and push the piston up. The “displacer” move the cold air to the “power piston” so that he moves down.

Warm gas moves from the hot sector to the cold sector and turn the energy into mechanical movement.[4]

With boiled water that turns into steam under pressure. Now you can put the hot steam into a piston. The steam expands in all directions and presses the piston up. Thus the hot stems come from above and press the piston down. After pressing a valve to let the colder steam run out of the system. The crankshaft turns the up and down movement into rotation in a generator.[5]

Biogas consists only 51 until 55 % of combustible methane. Another big part is carbon dioxide with 44 to 48 % and a few other elements they are not flammable. That means that you can burn approximately the half share of the biogas.

For transformation biogas into electricity, you have always heat loss. Big biogas engines from 100 kWel and 1 Mwel are in a range between 34-40% electrical output.[6]

In Europe, the engines have a total efficiency of up to 85%.[7] The reason is that you use not only electricity.  To increase the efficiency the heat from the engine is used as well. Especially the winter month in Europe is cold and you have to heat the buildings up. With a local heating system that connects the buildings and the biogas engine. It is also possible to use the heat of the engine for growing vegetable in hothouses or drying wood in a hall.

For small scale biogas plants is common to use internal combustion engines because they are more efficient.  Also, compared to other engines the costs are not that high. It could be that the user spends more than 50% of the investment of the biodigester into the engine to produce electricity.

In a small village near Tshwane, South Africa farmer investment in a 3.5 MW biogas generator for a life cycle of 20 years.[9]

For running their milking machines a farm in Oaxaca and Tabasco produce with a “Sistema.bio” biogas generator electricity from a 40 m³ biodigester. In one year they save 116 kg of LPG with the biodigester.[10]

In October  2015 there was the first biogas plant in South Africa who fed the national grid with power. An installed generator which produces 4.2 MW of electricity. A group of big investors like BMW, Bosch and CAT try to move the energy mix in South Africa more to renewable energies. With a herd of 30,000 cattle and mixed waste from food, producers is this biogas plant a big one. It is not only an environmental aspect to produce power from a biogas plant. Further, the owner is able to save a lot of money. He produces 31 per cent of his farm power consumption and saves more than 2,211,605 $ until 2018.[11]

Also in Indonesia, some projects started. In Lampung, Sumatra the company “Green New Energy” construct a biodigester and want to generate 3 MW of electricity.

Or a lot bigger project with a capacity of more than 18 GW is still under construction. In 2020 the biogas plant should support 38,489 people in the region Lampung with power.[12]

There is a lot of potentials to convert biogas into electricity not only in Indonesia. The power is easier to transport through the country and there is an existing power grid which supports the people. But it is only rentable with a big amount of biogas. In developed countries its not so easy to find such big biogas producer. Also, the investment for the complex technology is expensive and not everyone is able to pay this money.

For every energy convert process, you have a somewhere efficient loss. But if you want high-quality energy like electricity then loss must be accepted.

In Indonesia, you don’t need the heat which is automatically produced in the engine process. For more colder areas it makes more sense to install a CHP engine (combine heat and power).

In a nutshell, is make sense for big biogas producer and areas where the electricity is more useful or easier to handle than biogas.