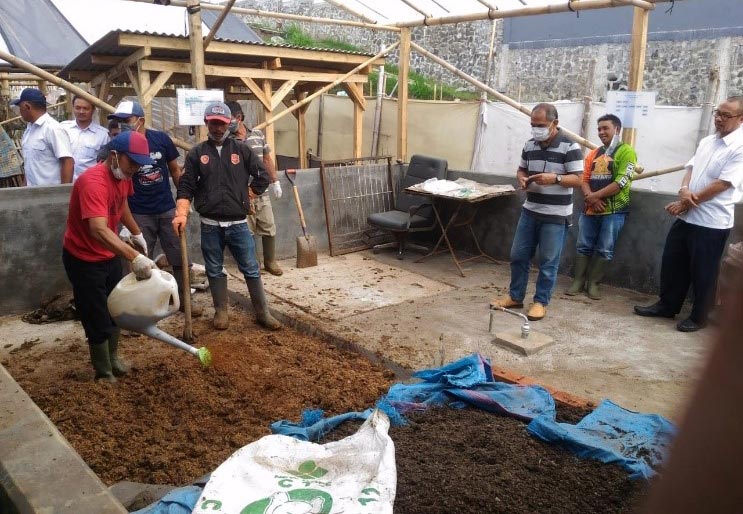 17 January 2020 – Cibereum River is one of the important rivers as it is providing water for the city of Bandung which has a length of up to 12 km. According to data from the Tirta Wening Regional Water Supply Company (PDAM), under normal conditions, the Cibereum Water Treatment Plant can produce 100 liters of water per second[1]. The upper reaches of the Cibereum River are located in two village areas; Sukajaya Village, Lembang District and Cihideung Village, Parongpong District are both included in the administration area of ​​West Bandung Regency.

Unfortunately, there is a high level of livestock waste pollution in the Cibereum Watershed. This is because the Cibereum watershed is surrounded by cattle ranchers who have low knowledge about the utilization of organic waste from livestock manure. The population of dairy cows in the two villages is fairly dense, with estimates exceeding 1,000 cows[2]. People with minimal knowledge are accustomed to dumping animal waste into rivers which causes high pollutants and results in sedimentation. Whereas animal waste is a great potential for reuse to be a blessing with biogas.

Not only the problem of polluted rivers, the condition of the cattlemen community in the Cibereum watershed is also cause for concern. With the high consumption of energy the livestock community is followed by a decrease in the availability of green land for the fulfilment of cattle feed needs making it difficult for the community to get out of the grip of poverty. One factor is the development of property and settlements in the Lembang and Parongpong Districts, West Bandung Regency, which has displaced the availability of green land for cattle feed. Farmers have to spend more money for the sustainability of their cattle farms by replacing cow’s green feed with tofu or cassava pulp. Surely this makes it more difficult for farmers to set aside their household income for other needs.

Until now the use of LPG gas among dairy cattle communities is still relatively high which is used for the purposes of cooking and handling dairy cows. The survey results show that on average the farmer household consumes five gas cylinders containing three kilograms per month[3]. In fact, the people of Cihideung Village and Sukajaya Village have been familiar with biogas since the early 2000s. However, the biogas technology introduced to the community did not have clear standards and had a maximum durability of only one year functioning. This causes the distrust of the community towards biogas installations.

On the other hand, Sukajaya Village and Cihideung Village are the center of ornamental flower cultivation. The need for manure to support these business activities still depends on chicken manure supplied from outside the area. Likewise with horticulture activities that still rely on chicken manure fertilizer. The abundance of animal manure should be able to be processed back into fertilizer which can be a source of additional income for farmers. However, their ignorance of the process of processing livestock manure into fertilizer makes livestock manure not properly utilized and a source of pollution for the Cibereum River. implement a short three-month program to reduce river waste pollution with an integrated and sustainable approach to livestock waste management for the welfare of the environment and society.

In the span of October – December 2019, infrastructure activities such as the construction of biogas reactors, construction of organic fertilizer production installations, construction of worm culture facilities, and the construction of simple wastewater treatment plants (IPAL) have been well implemented. Then, for community assistance activities such as increasing environmental awareness, training in waste management, strengthening institutional groups, and entrepreneurship training, has also been carried out. Infrastructure development and facilitation approaches are adapted to existing local wisdom and with active participation from farmers.

The implementation of the program has led to the formation of the Obor Desa Group which currently consists of nine people. The Obor Desa members come from representatives of four livestock groups in the Cihideung and Sukajaya Villages. The members also represented two livestock cooperatives in the North Bandung area; North Bandung Breeder Cooperative (KPSBU) and Puspa Mekar Cooperative.

The establishment of the Obor Desa is intended as an initiation of a livestock waste management approach that involves a joint group of livestock. This was agreed by Mahmud as the counselor of the Livestock and Fisheries Service Office of West Bandung Regency. He explained: “In carrying out activities aimed at increasing the independence of waste management and welfare of farmers, it will be very difficult to achieve if the approach is limited to livestock groups that are limited by the location of the area and membership of the main cooperative. Obor Desa as a new entity is a gathering of several groups of livestock is expected to be a unifying knot of farmers in an effort to improve the welfare of nature and farmers. ”

In a span of three months, the Obor Desa has shown its success. At present, 1,700 kg of cow dung is used for biogas reactor filling, worm feed and organic composting. Cow manure uptake is expected to increase along with the development of worm farming and compost fertilizer business carried out by members. At present, several farmers have also expressed their desire to join the Obor Desa.

The business activities of worm cultivation and compost making are predicted to be able to increase farmers’ household income by 25% – 30%. The worm harvest period for members of the worm will be held in early February 2020. In addition, another benefit of the program is the optimal functioning of the biogas installation so as to provide free energy access for the cattlemen community.

During a routine group meeting, one of the Obor Desa members, Een Hernawati joked: “At present, my LPG stove has been retired. The gas supply produced by the biogas reactor is more than enough to meet the daily needs of the household and the handling of cattle. ”

1. Gender mainstreaming in the program

Rumah Energi has a long experience in assisting the community of dairy farmers. Rumah Energi found that one of the obstacles in the development program in the dairy farming community was that there was still a gender imbalance in access to work or income and the management and ownership of assets in the farmer’s household. Typically, ~ in the family of dairy farmers all family members depend on their income from milking activities. The role of men (fathers) is most dominant in making decisions and implementing livestock governance. Women and young people usually only assist male roles such as bathing, blushing, and delivering the results of milk to the collector. The role of women and youth who are merely servants does not have power over the income earned.

Worm cultivation activities and compost fertilizer business have provided new jobs for farmers’ families. In carrying out the new work, Rumah Energi encourages women and youth to take control of additional income opportunities for families and access to independence for them. The division of roles and responsibilities in work has succeeded in maximizing income for the family.

Starting from 2009, Rumah Energi in West Java has carried out several community assistance programs to support the government’s goals in achieving renewable energy, developing organic agriculture, waste management, and developing human resources. Good relations between the Energi House and various parties such as government agencies, private institutions, and the community, facilitate the coordination of the Rumah Energi in every activity carried out. One form of cooperation between parties in assisting the Obor Desa is realized in the cooperation of the Rumah Energi and the Department of Food Security and Animal Husbandry (DKPP) of West Java Province for organic certification of fertilizer products made by the Obor Desa. At present, the Obor Desa fertilizer product has been certified organic with number: 511-INOFICE / LSO-003-IDN / 12/19.

3. The regeneration of local facilitators for the dissemination of knowledge

In every program activity in West Java, Rumah Energi always tries to increase the facilitation capacity of the beneficiaries. This was done as an effort to support the dissemination of knowledge between farmers / ranchers by local facilitators. Rumah Energi believes that the success rate in the communication process will be easily achieved if done between farmers / breeders.

As a result, the Obor Desa has been trusted by the Village-Owned Enterprises (BUMDES) of Cimenyan, Bandung Regency, as a companion in the development of worm culture in the region. Then, Obor Desa has also collaborated with the Department of Community Education, Universitas Pendidikan Indonesia in developing the capacity of farmers in Kampung Kancah, Cihideung Village, West Bandung Regency.

In the marketing of worm products, Obor Desa is currently affiliated with marketing with the Padamukti worm cultivation group which is also a target of Rumah Energi. The business affiliation of this group is carried out to regulate the supply chain of worms between the Rumah Energi fostered group and other cultivator plasmas that have been developed by the group itself. For fertilizer products, although it is projected to supply the needs of the local market, currently there is cooperation to supply 1.5 tons per month of fertilizer to Botani Mart, Bogor Agricultural University (IPB).

The Rumah Energi assistance program for the Obor Desa group was completed as of December 2019. The Obor Desa was still incomplete and still lacked in several aspects. Supervision and further assistance for the Obor Desa is highly expected from various parties such as local governments, cooperatives, and other parties who can help the sustainability and development of the Obor Desa in the future.

To summarize, Rumah Energi believes that the mentoring model that has been implemented on the Obor Desa is able to contribute positively to the government’s achievement targets for the Citarum Harum National Program. Rumah Energi is ready to partner with all parties for an agenda to broaden the reach of beneficiaries and the application of the assistance model that has been implemented to the Obor Desa.