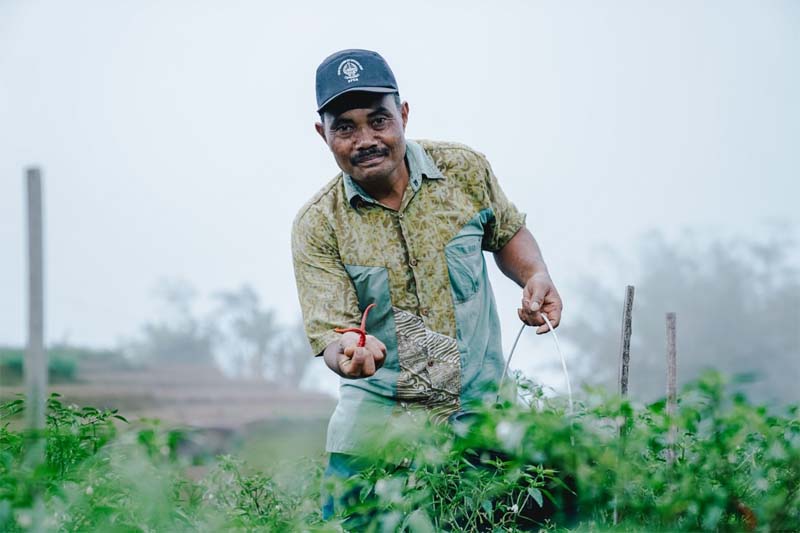 Pak Ahmad is a member of the Bukkulu Livestock Group in Bukkulu Hamlet, Loka Village, Rumbia District, Jeneponto Regency. Started from the agriculture practice work activities of his son’s located in Bantaeng Regency where Ahmad was introduced to biogas. How excited Ahmad was to know of biogas technology and how bio-slurry could be used for agriculture, moreover this bio-slurry was made from cow dung. As a farmer, Ahmad has often used manure for his farm.

Ahmad took the initiative to make a visit where his son did practical work activities, precisely at the residence of Mr. Idris, one of the biogas users fostered by the Animal Husbandry Department who is also an independent inseminator in Bantaeng. During his visit, Ahmad found that the bio-slurry produced by the Pak Idris biogas reactor was simply thrown away without being reused, that is where Ahmad saw potential.

By turning his brain, Ahmad found out how to get biogas. How lucky Ahmad, in the District of Rumbia where he lives, there are groups of farmers who get unused biogas reactor. Ahmad had the initiative to move the biogas to his residence, but Ahmad did not have money. It was told to his family members who introduced Ahmad to one of the Construction Partner Organization (CPO) in Jeneponto Regency, Mrs. Rosmiyati from CV Rezki Abadi. However, unfortunately Ahmad’s request was rejected by Ros because Ahmad did not have cattle at that time. In fact, Ahmad had two cows that are entrusted to his group members and only one goat resided in his house. After that, Ahmad successfully agreed to enter the proposal for submission of assistance from the Department of Energy and Mineral Resources (Kementerian ESDM) for the 2018 budget year after he promised to take back his cattle. Ahmad also used a portion of his chilli crop to buy an additional two cows to provide enough for building the biogas reactor.

After two months since buying additional cattle, the construction of a biogas reactor for Ahmad was carried out and after completion, Ahmad received user and bio-slurry training. From the training he began to get a picture of the use of bio-slurry in his plantation land, but its use was still modest without a controlled dose. The practice of using bio-slurry monitored only after the demonstration activities carried out by Rumah Energi in several districts, and Ahmad was chosen as one of the demonstration plot locations. Mrs. Ros as the CPO chose Ahmad as the location of her demonstration plot because she saw that Ahmad had such seriousness and interest in biogas and the use of bio-slurry. In addition, he has adequate horticultural farmland as a demonstration plot.

Besides Ahmad, there were four members of his group who participated in the demonstration activities accompanied by Mrs. Ros, namely Nasir, Mansur, Ismail, and Karimun who also received biogas reactor assistance in the same year as Ahmad. After this demonstration plot, Ahmad began to gradually reduce the use of synthetic fertilizers on his farm. At first it was reduced to 80%, then 70%, and so on until now only 40% consumption of synthetic fertilizers used by him.

Then in November 2019, Rumah Energi bought Ahmad’s liquid bio-slurry to be distributed in tree planting activities for the anniversary of Rumah Energi. Although Ahmad initially refused because he did not have the heart to sell it, but in the end, he accepted it. From this purchase, people began to get to know Ahmad’s bio-slurry packaging products and now almost every month someone buys his liquid bio-slurry which has been fermented for Rp10,000 / litre.